Where internet companies don’t want to burn their fingers on the suggestive, the inefficient, the absurd and mythical, The Techno Oracle TTO opens up the spectrum of search query technology to the realm of uncertainty, intuition and even magic.

The Techno Oracle (TTO) finally acknowledges the metaphysical depths of our worshipping of the internet as the solver of all our lives’ problems.

The exhibition space of esc medienlabor is transformed into an accessible installation, in which visitors enter as beta-testers of the system, and they might leave with a day planner for a “perfect” life.

TTO is developed in the frame of Iterations, a joint project of media organisations esc in Graz and Constant in Brussels. Iterations is a series of exhibitions that aim to gain visibility for collective digital artistic practices. 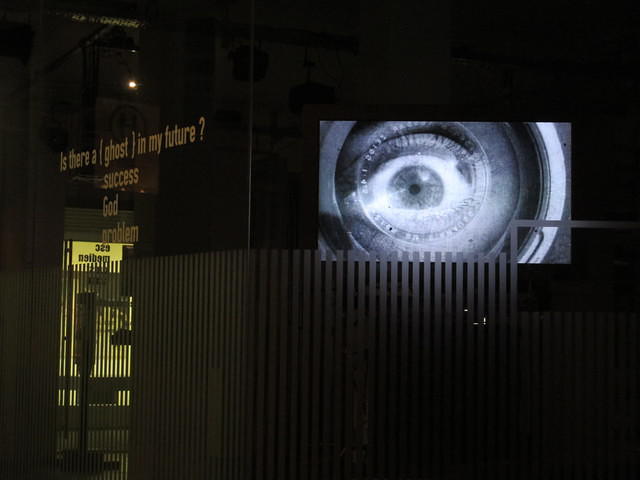 Here you can find images of the preparations and installation: http://gallery3.constantvzw.org/index.php/Iterations-TTO-Tech-Oracle

ITERATIONS can be considered as an experimental arrangement with blurred boundaries. The project creates a situation based on art extending into other fields and disciplines: informatics, sociology, privacy studies, network theory or copyleft studies.

At the beginning of the Internet, networking consisted in an infrastructure that actually grew in a decentralized way, which necessitated, facilitated and also conditioned cooperation at the same time. This collective character of the web marked art and culture of this newly emerging virtual space with branches into realms created by fantasy and functioning on equal terms. The basic concept was the interleaving of various strands of knowledge and experience in order to gain insights into the present.

Software and hardware were aimed at facilitating the coexistence of collective and individual elements. With the developments around web 2.0, it was (almost) exclusively the users’ individualization that was fostered through the simultaneous monopolization of the infrastructures. The individualized is thus the default (the “norm”), while even though collective forms are still present and possible, they rather exist in the background.

The two organizations that initiated this project, Constant and the esc media art laboratory, were founded at a time when the semantic web and web 2.0 were still well-meant, partly also utopian ideas. Today, not only technically accomplished activists, but also above all multinational companies are concerned with open-source and free software. The latter has transformed itself from the promising alternative into the digital mainstream. Terms such as “open”, “sharing”, “cooperation” are nowadays an integral part of the inventory of the online business. ITERATIONS, however, suggests reconsidering the current use of these terms. ITERATIONS deals with the processes and motivations that prompt artists to explore models of cooperation that make use of free digital tools.

The Tech Oracle is the first in a series of ITERATIONS. After its realization in Graz, the next Iterations in 2016 will be carried out in Italy and in Brussels. TTO reflects on the disproportionate confidence that we currently place in services of the WorldWide Web. Because it seems as if we would not only look for practical answers in the web, but also for instructions for the next steps in our lives.